Introducing Dogs
Do you have a dog that could use a friend? Trying to arrange a play date for your dog to burn off energy? There are things we can do to set the stage for introductions to get off to a great start!
If both dogs are very ‘dog social’, introductions are much easier. But some dogs are a little picky about their friends. Maybe they haven’t had many opportunities in the past to play with other dogs and so are more ‘socially inept’. Some dogs just play too rough for other dogs. Dogs that aren’t spayed or neutered may make meeting new friends more difficult. Maybe past introductions haven’t gone so well and they aren’t as eager to make new friends.
Always start with caution. Meeting on neutral ground where neither dog will be tempted to feel territorial and in a large open area…like a park.  Begin with each dog on a loose leash so that the handlers don’t communicate stress and anxiousness (via the leash) to the dogs. Handlers should both be calm and relaxed! 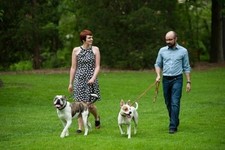 Start a good distance way from each other and walk parallel to each other. Then cross paths (at a distance) so each dog can smell where the other has been, allowing them to get to know each other a little...then get a bit closer.
Learn to teach ‘Find It’ or ‘Look at That’ to calm them down. This will make for more positive associations with the other dog if the need arises. If either dog has a history of difficulty getting along with other dogs or begins to bark, snap, or lunge have an experienced certified trainer or professional behavior consultant to help you gradually introduce the two dogs to each other. 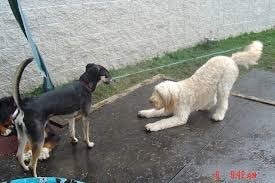 If all is going well let the dogs meet. As the dogs get closer watch their body language. Some dogs may need to do a little posturing (like barking or pulling but should settle down after a brief time. There should be no signs of hostility and seem interested in each other without excessive arousal, meaning, their tails should be wagging at half-mast (not stiff and high), loose wriggling bodies, play bows.
Now you can take them to an enclosed area free of toys (especially balls) and food treats.Drop their leashes (but leave them on in case you need to separate them), step back and give them space to get to know each other. Try not to manage the new interactions and let them work out any differences themselves. If one of the dogs gets too intense for the other, it’s okay for that dog to say ‘Stop, that’s enough!’ with a gentle nip or growl. The other dog should then respect that and back off a little. If not, it’s also okay for one of the handlers to give a verbal cue like ‘Easy’ or ‘That’s enough’. Some dogs will shake off as a way to release some of the tension and start again in a more polite way.
Once play seems to be going well you can remove the leashes, but don’t be in too much of a hurry to do so.
Only step in and physically separate the dogs when they become too excited, when they can’t give themselves a break, or when it’s clear that their meeting is heading for conflict. Come prepared to break up any aggressive interactions. I like to have an air horn and citronella spray handy. A hose is also a good way to end hostilities.
Some body language to look for: 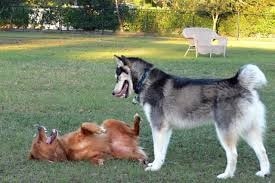 If you’re introducing a puppy to an adult dog you can use the same procedures. If the puppy is very young (under six months old), they may need more frequent breaks from each other. Some adult dogs quickly lose patience with puppy’s energy.  Never leave them unsupervised and alone together until you are certain that puppy is safe.
If you aren’t comfortable or confident at any point get the help from a relationship-based trainer who has experience with dog-to-dog interactions.

www.beggintobehave.com          beggintobehave@gmail.com       Like us on Facebook: BeggintoBehave
All rights reservedved. Permission is given for the reader to download and print one copy for personal use.
Any other user requires permission of the author.